Women-led movements have in fact dominated the public space in recent times and they have shown very high levels of resilience to injustice and the ability to constantly fight. Previously, female activist groups in Spain, South Africa and India had organised mass rallies in protest of sexual exploits, discriminatory state rules and regulations, and violence against women. Also, Saudi Arabia and Iran were not left out as female activists protested against the driving ban and wearing of the veil. While in the last few months the recent campaigns have been to declare war on abortion bans. 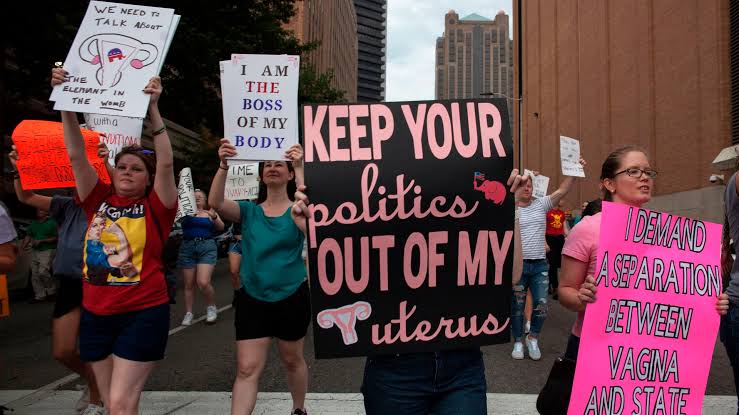 As abortion rights campaigners flood the streets of Alabama, “get out of my uterus” one lady screams in front of a crowd of women holding up placards saying “we dare defend our rights” after the state passed the United States toughest abortion law. Also, with the last abortion clinic in Missouri expected to shut down this week, this would effectively end legal abortion in the state as well.

Many are of the opinion that an end to safe abortion, either through medical pills or surgical treatments undermines the health and human rights of women and girls globally. And I am of the opinion that it is a real public health crisis. When abortion is illegal then it becomes unsafe. Making the deliberate termination of a human pregnancy unlawful, paves way for an alternative means to access abortion. The ban cannot stop the process, but secretly allows unprofessionals to get rich quicker. Take a look at Buenos Aires in South America, an estimated 500,000 unsafe abortions are performed annually even after the bans. (Aljazeera, 2019)

With regards to the highlighted report from Aljazeera, it is clear that people will in the future still engage in medical and surgical abortions but in the hands of unlicensed practitioners, which poses a threat to life. Abortion has to be legal, as least to some degree at hospitals so that no woman dies in a very poor condition due of an illegal, dangerous abortion procedure and the fear of getting thrown into jail.

What sickens me the most is rejecting an attempt to add an exception for rape, incest or when the pregnancy poses a risk to a woman’s health. This further restricts women’s rights. A woman should be able to decide if she wants to have a baby or not. Imposing laws that restricts her reproductive rights is a matter of concern. Instead of a total abortion ban, laws which bans abortions once a foetal heartbeat can be detected, about six weeks into pregnancy, would give a woman or girl some time to decide. I would like to pose a question: are women going to be prosecuted after experiencing miscarriages or refused obstetric and gynaecological emergency services due to the unplanned expulsion of the foetus? These are situations which needs to be critically evaluated and considered before tough bans are implemented into law.

These legislators advocating much stricter abortion laws are mostly men. The many “tough-guys” who do not and cannot understand what women or young girls have gone through or have to endure during pregnancies, especially when it is unwanted. So they are therefore not in the best place to ban what they do not understand. If I may ask, have they lost any of their male friends to childbirth or have they themselves experienced pregnancy? Men are not supposed to understand what it entails and for that reason are not expected to make judgements on such a delicate case. It is not a journey plied by men, so therefore they have no business telling women what to do with their bodies.

It is obvious that this is another approach aimed at refusing to acknowledge women’s rights, an attempt to punish women further. Based on records of women jailed for trying to remove rapist’s babies, restricting abortion access is most definitely an effort to attack women rights. In all, I think this is a move in the wrong direction and there is no way stricter abortion rights bill wont suffer a setback with time.